Isaac Andakian was invited by RT Arabic as an expert on international conflict to discuss Prime Minister, Nikol Pashinyah’s, statements on the ongoing Armeinian-Azerbaijani conflict, Turkey’s direct involvement in the war, the liberation of territories, the internationalization of the conflict, Azerbaijan hiring Syrian mercenaries and terrorists, and the history of the conflict dating back to 1921.

“If we really want to go back to historical roots of the dispute… we should go all the way back to 1921 when Joseph Stalin took this land away from Armenia and gave it to Azerbaijani to achieve his political goals. So, the Armenians are now trying to return what is rightfully theirs. If we want to talk about history, we should go back to the roots instead of picking the facts that suit some theories.”

“Armenia doesn’t want to internationalize this conflict, but the nature of the conflict demands it since today we have several regional and international players involved in it, one of them is Israel, which supplies Azerbaijani with arms.”

“We all know that globally there is an ongoing fight against terrorism. Azerbaijan is using terrorists to put pressure on the international community, so internationalization is in the very nature of this conflict.”

A brief summary of the news video

A Brief Background of the Armenian-Azerbaijani conflict

As a country, Armenia existed for almost 3500 years. Yerevan, Armenia’s capital, is one of the oldest cities in the world as it dates back to the 8th century BC, and in 2019 it celebrated its 2800th anniversary. Armenians are the endogenous inhabitants of Eastern Anatolia. According to Genesis 8:4, Noah’s Arc is rested in Mount Ararat in Armenia (now under Turkish occupation following the Armenian Genocide in 1915). Mount Ararat remains one of the Armenian national symbols depicted on the coat of arms of Armenia since 1918. It is worth noting that Armenia is the first Christian nation-state in the world as it adopted Christianity as the religion of the state in 301 A.D. almost 80 years before Rome. Historical Armenia’s area has been around 300,000 KM2. However, over centuries, Armenia lost around 90% of its historical lands and current Armenia’s area is almost 30,000 KM2 with a population of 3 million living in Armenia and a diaspora of almost 10 million.

The Azerbaijan Democratic Republic (simply Azerbaijan) is a recent country established in 1918. Both Armenia and Azerbaijan declared independence from the Russian Empire after the latter’s collapse in 1917-1918. However, both countries became part of the Soviet Union when the red army occupied both countries. In 1921 while Joseph Stalin was the acting Commissar of Nationalities for the Soviet Union, he annexed Nagorno-Karabakh and Nakhitchevan from Armenia and joined them to Azerbaijan (See Map 1 below). Despite being part of Azerbaijan as of 1921, the majority of Nagorno-Karabakh’s population has been Armenian (almost 85%) and has had a self-autonomous rule. 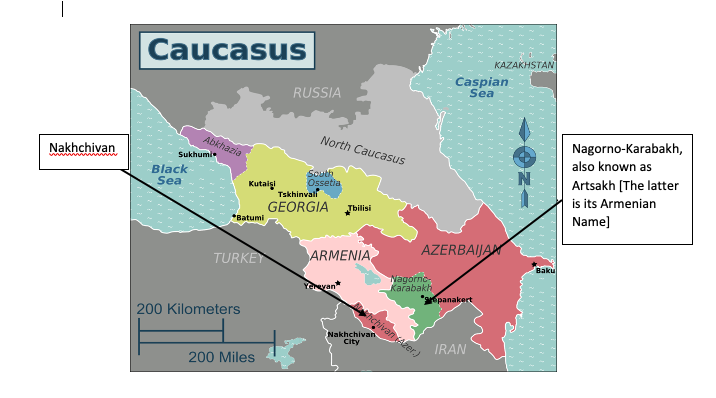 Nagorno Karabakh Autonomous Oblast, a region of southwestern Azerbaijan, voted to unite with Armenia on February 20, 1988. When Azerbaijan declared its independence in 1991, it dissolved the autonomous Oblast in Karabakh and divested the powers of its autonomous government. Therefore, the Armenians living in Karabakh declared the establishment of the Nagorno-Karabakh Republic on September 2, 1991 (2 days after Azerbaijan proclaimed its independence). On December 10, 1991, Karabakh had an independence referendum whereby 82.2% of registered voters (all Armenians) participated and the remaining 17.8 % registered voters all Azerbaijani national boycotted the referendum. 99% of those who participated voted for the independence, and independence was declared on January 6, 1992.

Azerbaijan considered this act as a defiance to its territorial integrity and threatens its sovereignty. On the other side, Armenians living in Karabakh (who were the vast majority of its population) wanted their independence from Azerbaijan based on the Wilsonian Right of Self Determination. Consequently, Azerbaijan launched a full-scale war in 1992, which lasted until 1994 and ended due to a ceasefire agreement imposed by the MINSK group. Before the full-scale war, there was guerilla fighting between the Armenians of Karabakh and Azerbaijan between 1998 and 1992 during which there was ethnic cleansing of Armenians due to “Armenophobia” in many regions in Azerbaijan, especially in Baku, the Capital of Azerbaijan, in what was known as the Baku pogroms of 1990. “Armenophobia” sentiments still persist in Baku and Turkey nowadays.

The Organization for Security and Co-operation in Europe (OSCE) founded the Minsk group, co-chaired by the USA, France, and Russia to end the Nagorno-Karabakh conflict. Minsk Group managed to impose a ceasefire in 1994 but never reached to a peace agreement between both parties. The ceasefire was violated many times and there were military clashes between both parties, perhaps the most significant of which was in 2016 that lasted for 4 days. On September 27-28, 2020, Azerbaijan backed by Turkey launched an unprovoked war on Karabakh in an attempt to restore the territory. The recent conflict has been ongoing since then and it threatens the peace and security of the Caucuses and might escalate to a regional war.

The conflicting parties belong to different religions. Although the Armenians are Christians, the Turks are Sunni Muslims, and the Azeris are Shiite Muslims, religion has a minimal role in the current conflict and is often used by the Turks and the Azeris for political support and leverage. The main driver of the conflict is race and nationalism. The people currently residing in Anatolia and the Southern Caucasus are mainly Turkic people except for in Georgia and Armenia. Turkic people are originally from Mongolia and China who became Eurasian nomads. They invaded central Asia, settled on its lands, and Turkified its populations over the centuries, especially following the Oghuz and Seljuq migrations to Central Asia in the 11th century (Founders of the Ottoman Empire were also Oghuz Turks). The majority of Turkic people today live in Turkey, Azerbaijan, Uzbekistan, Northern Iran, Kazakhstan, Turkmenistan, Kyrgyzstan (See location of these countries on map 2 below).

Turkey has an organic interest in the current Azeri-Armenian conflict because Erdogan wants to revive Turanism (the belief in the racial unity and the future greatness of the Turkic peoples) and the Ottoman empire through Neo-Ottomanism. However, the only geographical impediment standing in Turkey’s way to achieve the Turanism dream is Armenia (See map 2). For that reason, Turkey is supporting Azerbaijan not to say they are fighting with or on behalf of Azerbaijan, but they are united against the Armenians. 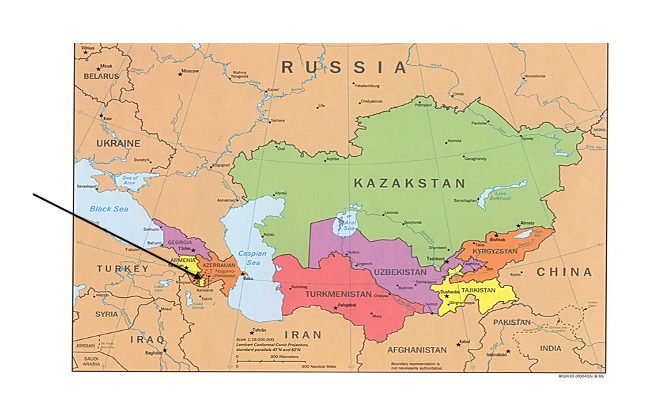 Their plan is to occupy Nagorno-Karabakh and Southern Armenia through which the geographic unity of Turanism and Ottomanism would be fulfilled. By doing so, Turkey will have access and safe passage to Azerbaijan, and from Azerbaijan to Central Asia through the Caspian Sea. Therefore, occupying Karabakh and Southern Armenia is of a paramount significance for Turkey. It is a matter of national security. Removing Armenia out of Turkey’s way will combine and unite the Caucasus with Central Asia under Turkish leadership. In other words, the Turkic people will be geographically united from Turkey all the way to Western China (See map 2).

Special thank you to RT Arabic for translating the news segment. Original video can be found here.