KENNESAW, Ga. (Apr 2, 2020) — PhD candidate, Joel Elliott, successfully defended his doctoral dissertation in the School of Conflict Management, Peacebuilding and Development’s first all-virtual defense on Friday, March 27th. His dissertation, “Taking Terrorists at Their Word: Testing the Co-Religionist Hypothesis in Islamic State Propaganda,” used a mixed methods analysis of Islamic State publications to test the theory, widely used in policymaking, that members of  the same religion (i.e., co-religionists) are more effective than other interveners at defusing religious violence and deradicalizing religiously motivated terrorists. Mr. Elliott hypothesized that if the theory were correct, ISIS propaganda would focus most heavily on attacking the theology and actions of fellow Muslims, rather than the culture or religions of non-Muslim states, because co-religionists would form the greatest threat to their recruitment and radicalization efforts. His findings, which supported his hypothesis, provide some of the first empirical evidence for the theory. They also develop the theory further by highlighting how degrees of theological similarity may be just as important as sharing the same religion. 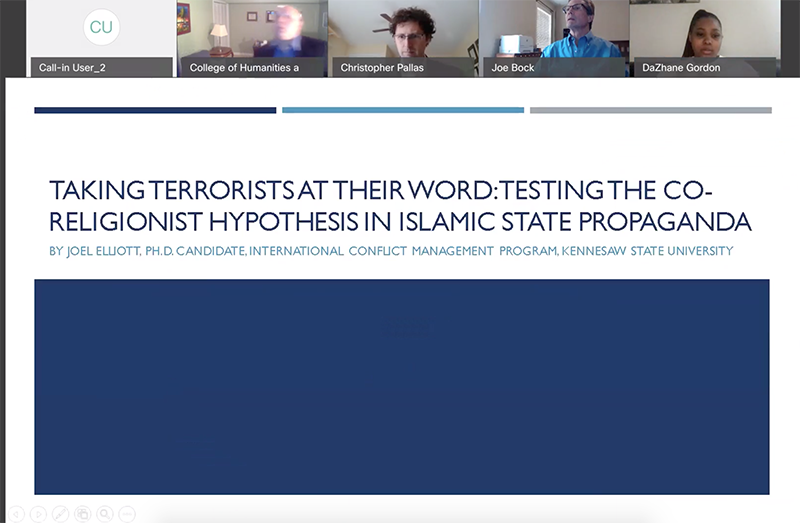 The defense was conducted over Cisco WebEx and went smoothly, especially for the first-time user. Mr. Elliott presented his work in split screen, providing visuals of both his slide and himself as the presenter.  He then fielded questions from the audience. Nearly 30 people attended the defense, including faculty and current students to not only watch him visually, but to also ask questions in the chat feature. Following the public portion of the defense, Mr. Elliott proceeded to meet online with members of his committee, including SCMPD faculty Dr. Christopher Pallas and Dr. Joseph Bock, and Dr. Alexander Henley of Oxford University, for deeper discussion and feedback.

The event met all of the expectations the School holds for dissertation defenses, including public accessibility and rigorous interrogation of the candidate.  The online format may have even facilitated a wider public participation. In fact, the audience numbers were higher than at many defenses. The virtual event highlighted SCMPD’s ability to carry on one of its core missions, training doctoral-level researchers, even amid the Coronavirus disruptions, and may be a feature we use in defenses in the future.

Title: Taking the Terrorists at Their Word: Testing the Co-Religionist Hypothesis in Islamic State Propaganda

This dissertation operates on the idea that, as conflict researchers, we can look to Islamic State’s (referred to from here on as ‘Daesh’) own recruitment propaganda to identify the best people to counter Daesh’s violent rhetoric. This project uses analysis of Daesh’s main print publication, Dabiq, to catalogue and classify the types of people and institutions Daesh targets most, and which types of arguments Daesh uses to attack those targets. It uses this information to test the Co-Religionist Hypothesis, which predicts that the most effective peaceful interveners in a conflict in which religion plays a major role will be of the same religion as the belligerents. Testing the predictivity of the Co-Religionist Hypothesis is important to conflict research because the conclusions I reach can help inform future interventions in religious conflicts. Conventional wisdom holds that Daesh, in choosing targets to fight both on the battlefield and in its recruitment propaganda, prioritizes groups that are less similar to it – for example, Jews and
Christians. My analysis upends this conventional wisdom. Lessons learned in identifying the types of groups that pose the biggest threats to Daesh may help guide counterpropaganda campaigns against Daesh and other violent, fundamentalist, religious groups.