The Return to Northern Ireland

KENNESAW, Ga. (Sep 26, 2019) — I just wanted to share some of my thoughts and experiences regarding my recent return to the country of Ireland. It was an amazing trip, but also eye-opening from a conflict management standpoint. The atmosphere was quite different from about 8 years ago when we were there last.

We flew into Shannon, Ireland on the west side of the island. The first two nights we stayed in the Cloonacauneen castle outside of Galway. We had a small group of us that rented out almost the whole castle. There was a local bar and restaurant downstairs. Though I saw the entire west coast of Ireland and 15+ castles on this trip, the nights spent at the Cloonacauneen castle bar were my favorite. The locals there are what made it so special. One night, in particular, stands out.

The second night I was there it was myself and one of my friends from Colorado. We were joined by two locals that I had seen there the night before, one named Kevin. Kevin and I had chatted some before, but this night seemed different and the locals were really engaged with us. Another local was there named Tommy, and then 2 older locals as well. The bartender was a young Irish girl named Ashlyn. No one else was in the bar.

Kevin and Tommy began asking us if this was our first time in Ireland. My friend answered yes, and of course, I answered no. When asked why I was here last, I explained I was in grad school and studying The Troubles. I met with politicians, former para-military members, and others involved in the conflict. I told them I studied it academically and traveled the entire east side of the island. The whole bar got completely silent. Everyone's tones and faces instantly changed. Tommy looked at me and said, "Maybe you shouldn't talk about that anymore if you know what's good for you." My friend from Colorado could sense the tension. I thought quickly, I could either back down (avoid) and change the subject, or press forward (compete? collaborate?) and try to explain myself. I had a few Guinnesses at that point, so I pressed on.

I explained it was an academic interest and no disrespect was meant. Kevin sat quietly in the corner and stared at me as Tommy continued to try and tell me it was nothing to be talked about. He wanted me to drop it. Ashlyn, the bartender, was trying to hint the same. It was an awkward moment. I just kept saying it was academic in nature and I was truly interested. I wasn't getting any traction.

Then Kevin spoke up and sort of broke the tension between Tommy and I. It was like he began to test my knowledge. He said vaguely, "So do you remember the picture of a man waving a white handkerchief?" I responded without hesitation, "Yes, you mean from the attacks in Derry during Sunday Bloody Sunday." I then turned to my friend from Colorado and explained how people from Ireland who are Catholic typically say "Derry" and Protestant Irish typically from Northern Ireland would call it "LondonDerry." Being in Galway, I knew which one to use. Immediately the bartender, Kevin, and Tommy realized I had some basic knowledge of Irish history and context.

Kevin continued on, "Well that man waving the white handkerchief, he was my father-in-law and a good friend of mine, named Bishop Edward Daly. He was the Bishop of Derry at the time of the attack."

I immediately pulled out my phone and scrolled through the photos from my 2011 trip. I walked over to him and showed him this picture and asked: "Is this Bishop Edward Daly, your father in law? Holding the white handkerchief?"

Kevin couldn't believe it. Tommy couldn't believe it. I had a picture of the mural of his father-in-law in my phone. Later when I was in the restroom, my Colorado friend said that Tommy and Kevin told him, "Your friend really knows his stuff. We never meet Americans who are actually interested in our culture and history." Later, Kevin showed us a video of Bishop Daly's funeral in Derry from 2016, 4000+ people attended and every Bishop and Cardinal from the island attended. It was like Catholic royalty he said. Kevin can be seen in the video walking just behind the casket.

The rest of the night, the locals explained their fears of Brexit and what it could do to re-surface The Troubles. They explained that the para-military organizations certainly still exist, and operate on the sub-surface ready to commit violence again. The hate between Protestants and Catholics, Northern Irish and Irish, still exists. A hard border would be detrimental for everyone. The tensions in the country are higher than ever. They all talked trash about the Northern Irish and Protestants. Even the older locals that were mostly quiet would chime in occasionally. It was obvious we were in a Catholic/Irish bar and my friend from Colorado began picking up on the subtleties as well. He began to understand the things they were saying and why they were saying them. We closed down the bar and were the very last to leave. I hugged Tommy and Kevin. We shared laughs and smiles until it was over.

I'll never forget Tommy and Kevin. They really opened up and shared their inner thoughts once the tension subsided. Without my intimate knowledge of The Troubles, thorough my time with the MSCM program, I would have never had that experience that night at the Cloonacauneen castle bar. Period. The world is such an interesting place when you tap into the culture. 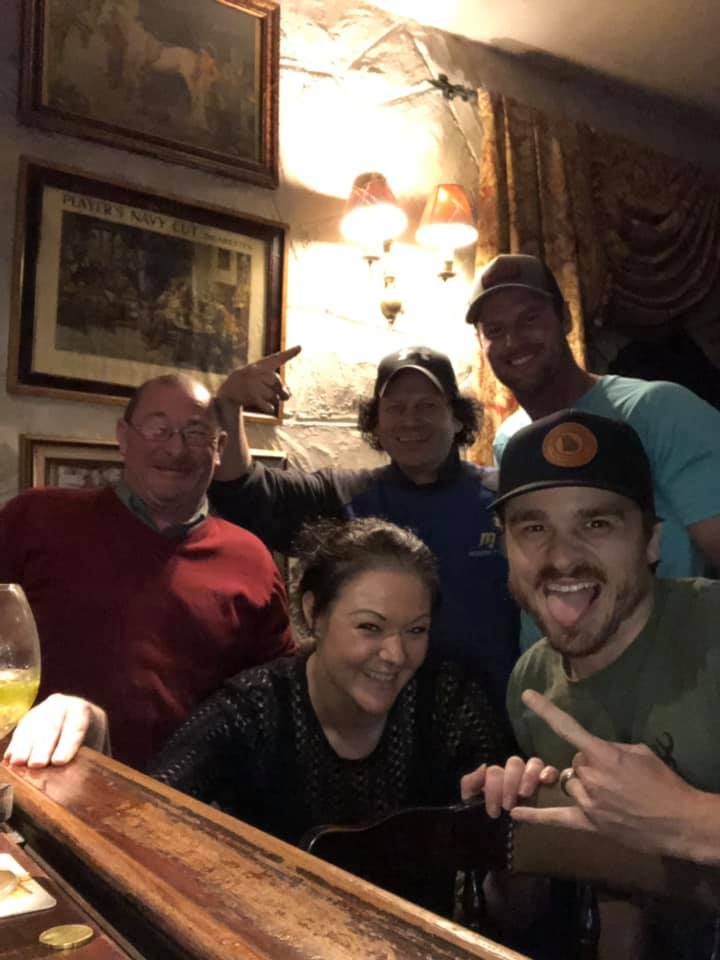 Here we are.
Kevin in the glasses, Tommy with the black hair, Ashlyn, me, and my friend from Colorado.