Graduating senior SJ Zinets has a lot to celebrate

KENNESAW, Ga. (May 11, 2022) — Although Sergey J. Zinets will graduate this week with a dual degree in Spanish and Psychology from the departments of World Languages and Cultures and Psychological Science, this is not his first KSU graduation.

He earned his Bachelor of Science degree in Finance in 2018. That makes three undergraduate 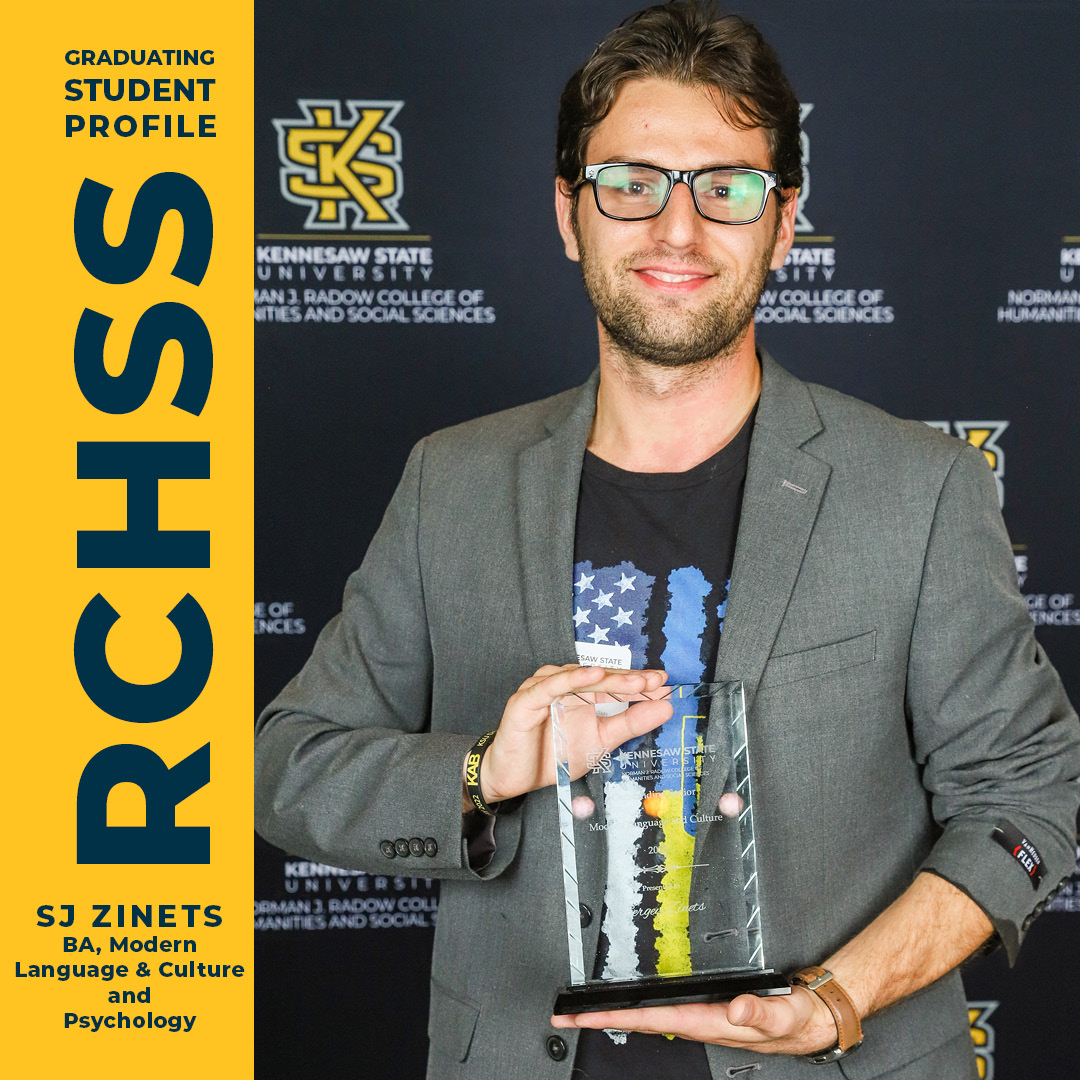 degrees total for Zinets, a first-generation college graduate and immigrant student from Ukraine.

But, if you ask him, the focus on his “first-gen” or immigrant “that-guy-from-Ukraine” status should not be his defining characteristics. Nor should the fact that he was presented with the Outstanding Senior award at the RCHSS All-College Awards ceremony on April 29th.

What stands out about Zinets is his humility, self-awareness, and willingness to grow from his experiences. When asked about his personal story of overcoming challenges and how he feels about his success he said, “Everyone has a different story. That’s important to remember that everyone has a different story. A lot of people who did not get the Outstanding Senior award, [they have] so many different skills, the way they communicate, the way they see the world, everybody has strength in different things.”

Although he admits that it was very satisfying to be recognized, his point was clear that every student brings something of value and it is up to everyone to take time to listen to people, to understand their journey, and offer support and encouragement.

As a first-generation student, his mother is proud of his accomplishments and Zinets will admit he experienced both relief and satisfaction in having pushed through the challenges he faced. Coming to America at 16, he completed high school in Ukraine and was not able to enroll in high school here. With the language barrier, he did not enroll in college and finding a job was not viable. Consequently, he spent more than two years at home, isolated and disengaged. He faced cultural challenges as well and even considered going back to Ukraine.

Zinets describes coming from a tight knit, culturally and ethnically homogenous community. To suddenly be immersed in a very diverse environment in the prime of his teen years was, “at first intimidating, and

then it was intriguing. Before I came here, I never saw anybody outside of my own race or culture. At first, I definitely made mistakes. Just not being prepared. For me it was difficult because we are so multicultural here and at first that might sound like that’s great…but because I was never exposed to it, I was kind of scared. And I couldn’t find myself.” He went on to say that it was difficult as a teenager to see people pursuing individualistic and capitalistic values because then you believe that is what you are supposed to be doing.

Trying to assimilate and balance his new-found American identity while trying to hold on to his Ukrainian identity was a tough balance, one that left him struggling to find his place. It was also a struggle that informed his early academic choices. After taking courses at Chattahoochee Technical College, he transferred to KSU to pursue a degree in finance, a choice driven by his perception of the American culture of capitalism. He says, “At first, I was trying to match the American culture, trying to match the individualism. So, I felt that I was not a part of it, but I wanted to be a part of it, I was trying to match the culture. My first three years at KSU I was just thinking about myself. That was not a good experience.”

He found a job using his finance degree but didn’t find it fulfilling. A little older and a bit wiser, he enrolled in KSU a second time to get his dual degree in Spanish and Psychology, a field that truly interested him. He also approached his second KSU experience differently and embraced cultivating his own community. In fact, it is this concept of creating community to which he attributes so much of his success. “I don’t think I could have done this without help of faculty and peers. The second time, I started building relationships with our great professors, staff; I made some really great friends with classmates and people from student organizations and that’s what helped me find myself. People were encouraging and helpful just in general.”

His new approach included getting involved in the KSU community as much as possible. The more people he met and the more conversations he had with faculty and fellow students, the greater clarity he had in the direction he wanted his path to take. Building his KSU network was also beneficial as it became an important support system since the war erupted in Ukraine.

Zinets has family in western and central Ukraine. Balancing the stress of completing his degree, holding down a job, and worrying about family was a lot to manage. He has had many sleepless nights. He struggled to concentrate on classwork and his job. He would read the news every single day, send money home, and keep up with relatives through telephone calls. He says, “the end of February,

beginning of March, was a very difficult time. My professors were very supportive. In my life you can’t really do this without a community.”

Zinets’ experience is both unique and universal, and it has been a powerful influence on how he sees his future. “At KSU, I am not the only person who goes through crazy stuff. We have a lot of people who come from no family, who are from single moms, first-generation students, we have immigrants, people from different backgrounds. Everybody is struggling with their own unique situations. The idea is to continue pushing through it, find a few people you like, ask for help, and be willing to help.”

Because he has had professors who listened to and supported him through his academic and personal journey, he is focused on how he can reach back and do the same for others. He is also sensitive to the idea that being a “first gen” means potentially coming from a background that may cause feelings of guilt or shame and as a result, students may not reach out for support because they feel vulnerable. For this reason, it becomes even more important to listen to a student’s story.

Today, SJ Zinets is considering pursuing an advanced degree and working in higher education. He hopes to provide the same support and counsel to others that he has benefited from while at KSU. “I am hoping in my future career to communicate to find everybody’s story, that strength, and give that little bit of help. I don’t feel special because I am just thankful for the people who recognized that in me and [gave] that little push to help me. Professors were very generous and helpful to me.

“Everybody has a spark. Hopefully I won’t forget that when I work in higher ed.”